How we extended the trello experience with power-ups 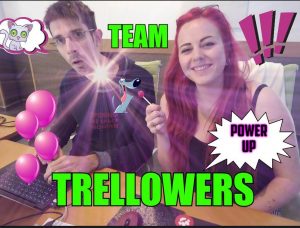 During our last Hackathon, Emma and Joris worked on a trello power-up in order facilitate your life !

They are both, front and back developper, Emma loves doing conferences in her unicorne dress and Joris is a serial blog post writer :D

Trello is a collaborative tool we use here at KNP to split projects in little tasks and share their progression between developers and clients.

If you’ve been working in software development for a few years, you’re aware that even before architectural or implementation decisions, defining what your client really needs stays on top of every project’s challenges. Let’s imagine you and one of your collaborators finally agreed on a feature definition (i.e it’s scope, what the feature will do, not how it will be achieved from a more technical point of view).

In an agile project’s workflow, chances are some of these steps will happen:

This little story brought to light the urgent need for us to log the history of every changes made against a project’s card. That way, we could have the opportunity to point an accusing “AHA!” finger at the unfortunate one who surreptitiously changed that card’s description.

From the idea to the POC

We approached the problem with the idea of using a web extension. They offer a convenient way to enhance the navigation experience and could be written using traditional browser-side web technologies (HTML, CSS, JS). So we created a POC during our last winter hackathon in January, to demonstrate that what we intended to do was possible:

No black magic behind the scene. We simply used the Trello native client to access their API with a good old XmlHttpRequest. In order to be called, the API requires explicit authentication:

Although this first version worked quite well, it also had several drawbacks. Because Trello is an SPA and we decided to use a web extension, we had trouble dealing with asynchronicity. Indeed, the Trello API only lets us perform actions on domain-oriented objects (card, boards, members…); that is, we still had no way to directly interact with the Trello front application, nor could we listen for events such as card loading success to know when we should get and display its history.

We considered getting around this problem by observing DOM Mutations, and detecting when a specific element entered the DOM, identified by its class or id. Oh listen, what’s that noise ? It sounds like the WTF alarms are ranging afar ! Relying on HTML attributes to identify elements, which are very likely to change over time, is a 100% chance for this project to end in the cemetery of repositories nobody dares to debug. We felt the time for a perspective change has come.

Trello offers another possibility to build features upon their application, with what they so-called Power ups. You can see them as external libraries which communicate with third-party services like Google, Facebook or the one you built with your little fingers. An important limitation though, these power ups are tied to specific locations opened by Trello, such ascard-back, card-buttons… These locations are designated by capabilities in their vocabulary. Capabilities are set in the Trello Power-ups administration board. Please note that only administrators can create and expose power ups to their teams.

At the bottom of that form, the iframe connector url targets where the application of the power up is hosted. As you can see, it must be served over HTTPS, which can be a bit tricky when working in a development environment.

Here comes Serveo to the rescue ! In a nutshell, Serveo lets you expose any local server to the Internet, which was handy for our testing purposes. So all we had to do was to create a new project from the power up skeleton project graciously offered by Trello and remix it to create our own service. This skeleton is hosted on Glitch, which provides a friendly ecosystem to collaborate on code and offers instant hosting with automated deployment.

Here is the file structure of the project:

Nothing fancy here. First, we perform an authorization check, then we render the history of the card if the user is authenticated, or we display a button to ask authorization to access the API if they’re not:

Here are some explanations on this piece of code: the initialize method takes an object as its first parameter, which associates each capability with the callback it should execute (in this case, as soon as the back of one card is revealed).

Keep in mind that power up capabilities are rendered in iframes. Yes. Please don’t leave. The renderHistory and askAuthorization at the end of the promise flow are simple functions that both return descriptive objects of how these iframes should be displayed. The important thing to understand is here: Each iframe targets a specific HTML page which runs its own JS script. That is, how can we possibly share data between those scripts ?

See that t argument ? It’s the power up toolbox, exposing helpful methods to interact with the context of the Trello board. For example, the t.set() method is to be used to store scalar values in the context (translations, for example, are a perfect use case for it). Once stored, a t.get() method can be called from any other script to get our translations back. Piece of cake !

This can be misleading, though. Tricked by our daily habits, we spent some time trying to over decouple things (i.e get the history data from the API in the main power up script above, store it in the context and only use other scripts for templating). The Trello buffer has a limit size of 4096 characters, so no need to say we didn’t have any chance to successfully store our stringified history there ! We wandered towards locale storage and string compression to bypass that limitation but finally figured out this is not how it was supposed to be done.

One script per iframe / page to be shown, simple as that. Let’s have a quick look on the history script:

The t.render() method ensures the history section is refreshed each time the user modifies the description of a card (so the previous description will be added to the history).

Here you can see how we get the translations from the context. We’re also using ramda to get full benefit of promise composition and fetch the card history from Trello. The renderCard function does nothing more than transforming a card object returned from the API in a renderable HTML string, and that’s all ! 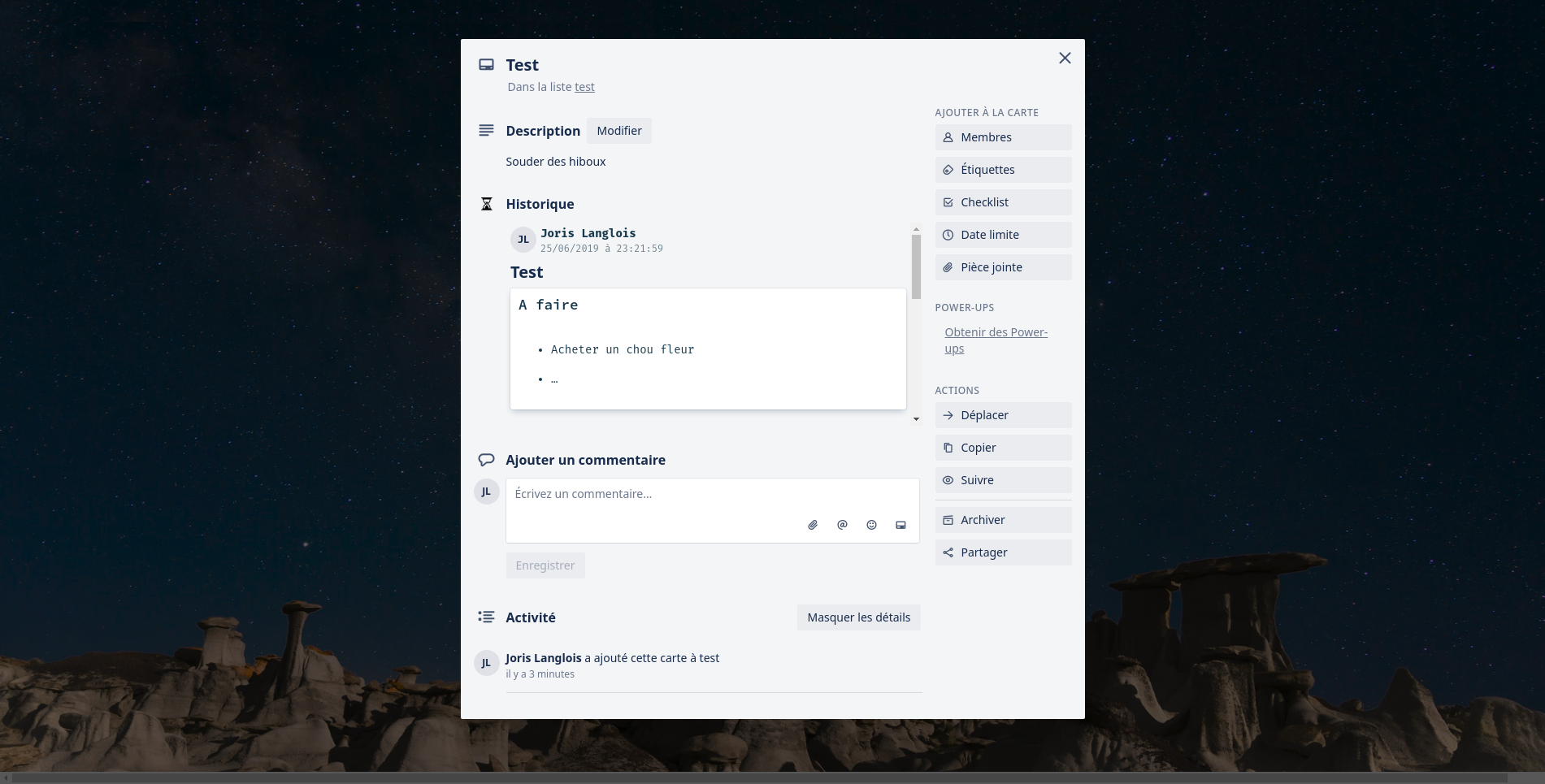 Of course, accessing a card’s history could have been achieved in many other ways: by connecting Trello to Slack for example. That said, we liked the idea of not depending of another service and having an “out of the box” solution that would work anywhere.

In the end, it was quite a pleasant journey to discover the Trello API and how to build power ups with it. Although their documentation is pretty sized, information is sometimes scattered, tedious to find and lacks of complete examples. Power ups still are a new thing in the Trello landscape (< 100 power ups were released as of late 2018), and we learned it the hard way when we faced problems with the authentication process.

Speaking of which, please remember that once the auth token is obtained, Trello will save it server-side. So if you’re facing authentication problems or weird behavior, cleaning cookies or the cache browser side won’t be of any help. We almost went nuts because of this, until we found out there was a special button made to get rid of that token: 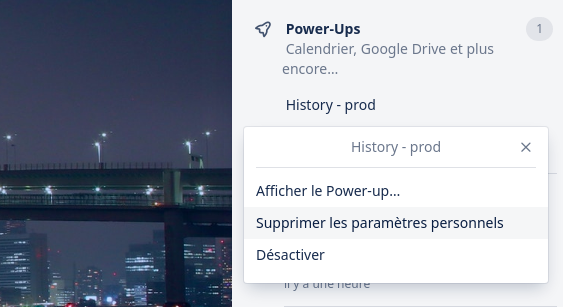 The final version of the Power-up was done during our last summer hackathon, and we are pretty proud of it. We didn’t had the time to go for a better, more decoupled architecture but it may be worth giving a try on an FRP implementation with React and Redux. We’re also considering to releasing this power up to the Trello marketplace.

If you want to use it for your own Trello boards, you can either:

Feel free to browse the complete codebase on GitHub !

If you have questions or want to work with us ? => hello@knplabs.com 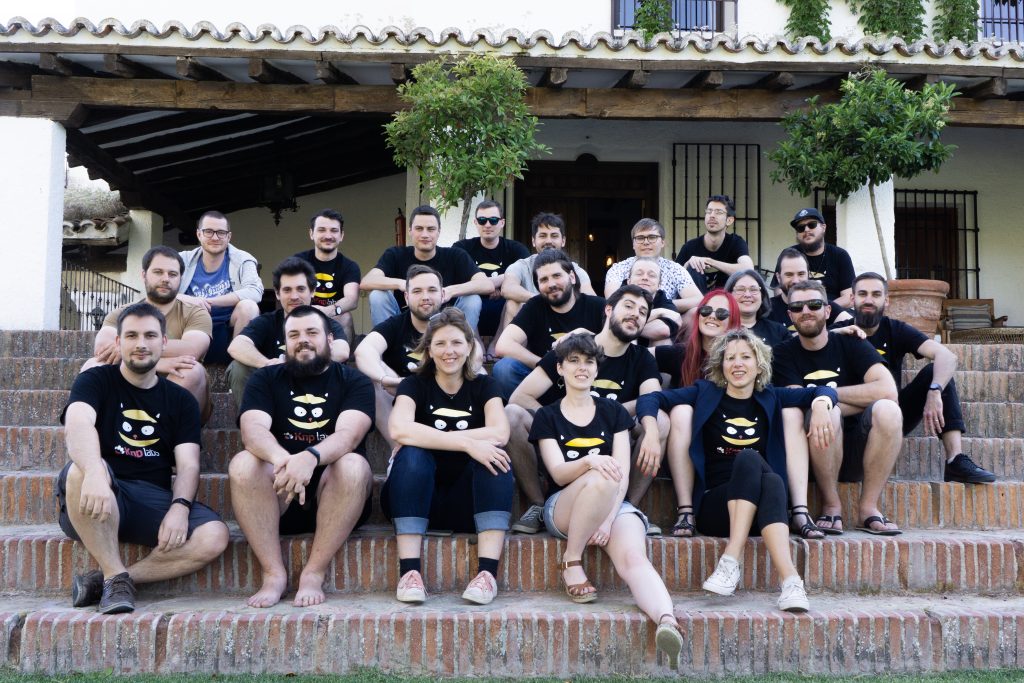